Home / Treatment Choices / How does alcohol affect the brain?

Many people are oblivious about how does alcohol affect the brain. Alcoholism has pervaded into the daily lifestyles of plenty of people around the globe.

Many people are oblivious about how does alcohol affect the brain. Alcoholism has pervaded into the daily lifestyles of plenty of people around the globe. According to NIAAA, 16.6 million Americans in 2013 had an Alcohol Use Disorder (AUD). Whether it is a glass of wine with each meal or a beer in a party, Americans have become obsessed with drinking. Alcohol intake has become the norm.

Deeply ingrained into America’s social fabric, it calls out for a serious reflection now.As we all know, everything coming with momentary joy does exhibit several long term effects. Alcohol intake is such an example. It is no secret that it affects brain staggeringly. But as to how does alcohol affect the brain needs an elaborate answer.

Alcohol affects the brain in several different ways. From slurred speech to difficulty walking and memory impairment, alcohol does inhibit the functioning of this crucial organ by showing up its poisoning symptoms. There is a term to refer to the damaging impact that over-consumption of alcohol has on the brain’s ability to function. It is called alcohol-related brain impairment in the medical field.Some of the negative effects are felt right after a couple of drinks. While in the case of heavy drinkers, they may continue experiencing the effects even after stopping the drinks. This may happen after achieving sobriety too. 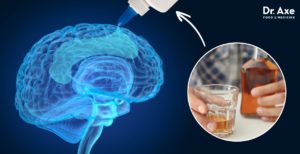 The active ingredient in wine, beer an liquor is ethanol or ethyl alcohol, the most common form of alcohol. Fermentation of yeast is a process that produces alcohol. In this process, sugar breaks down producing carbon dioxide and alcohol. Carbon dioxide exits the process through gas bubbles and leaves behind a combination of water and ethanol. However, if the yeast contains any air, the by-product will not be alcohol but ethanoic acid, an acid found in vinegar.

The regions of the brain affected by alcohol

As surprising as it may sound, alcohol actually stays in your entire system for a long time. Different regions of brains are affected by alcohol in different ways.

Cerebellum:The cerebellum is a crucial and major feature of the hindbrain. It is responsible for receiving information from the spinal cord and other parts of the brain to regulate motor movements. Cerebellum performs the functions concerning maintenance of posture, balance, and coordination.

Cerebral cortex:Cerebral cortex makes up the outer layer of the cerebrum and is made up of folded grey matter. It plays a vital role in consciousness and thought process. 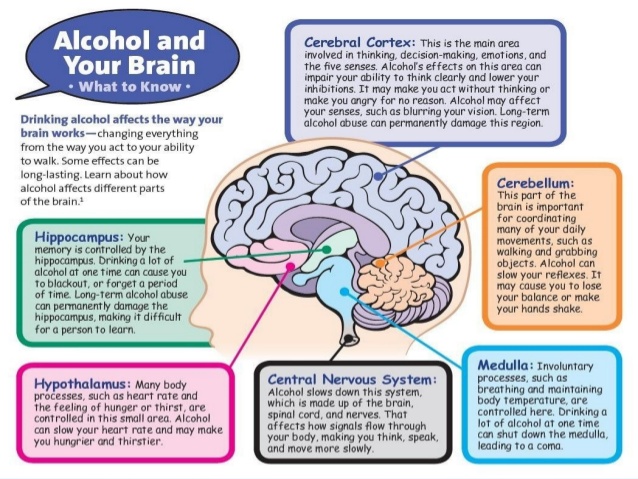 Hypothalamus and pituitary:Located at the base of the brain, hypothalamus although small but is a very crucial part for a brain. It is responsible for regulating body temperatures and release of hormones.In this region, alcohol serves the purpose of depressing the nerve centers that control sexual arousal and performance. As a result, the sexual urge may increase but the loss of sexual performance happens immediately.

Medulla:Located in the brain stem, Medulla functions by controlling autonomic (involuntary) operations, ranging from sneezing to vomiting et cetera.Alcohol induces drowsiness and slumber. Since medulla is also responsible for breathing, alcohol may act negatively by slowing down the breathing process and lowers body temperature, which may be fatal.Reticulated activating system:

This part is responsible for controlling the sleeping and the waking cycle, located in the midbrain.

Alcohol poses a negative threat by depressing these systems which causes a person to pass out.

Blood vessels: There are millions of blood vessels in our body which carries blood through the tissue and organs. Any disrupt in them can cause blockage and clots resulting in death.

Alcohol causes the blood vessels to widen and relax at intoxicating levels. However, at even more higher levels than these, it shrinks the vessels and increases blood pressure leading to migraine headaches.

Neurons:Neurons are an important and basic functional unit of the brain. They are specialized in transmitting information to other nerve cells, gland cells and muscles by first receiving sensory input from the external world.

Alcohol is able to penetrate these cells which may then damage and in extreme cases kill the neurons completely.

Short term effects of alcohol on the brain

Alcohol acting on the neurological level:Neurotransmitters are chemical substances that are released by the end of the nerve fiber by the arrival of a nerve impulse. GABA, Glutamate and Dopamine are three important neurotransmitters in the brain. Unfortunately, drinking alcohol alters and impacts the functioning of all three of them.

For the beginners and rare drinkers, alcohol works to slow down GABA which results in

While slowing down GABA, alcohol acts to speed up Glutamate which regulates Dopamine (the happy hormone). Since dopamine is located in the brain’s reward system, a target to increase its production results in the feelings of euphoria and pleasure. Furthermore, being drunk generates feelings of well-being. This is the reason why one feel warm, fuzzy and overall great while drinking in the beginning.

Long term effects of alcohol on the brain

To bring into limelight how does alcohol affect the body and the brain, one must look at the long term effects first. This is because alcohol is an alternate name for addiction. Once a person begins, he never ceases to look back which results in binge-drinking. Therefore, it results in a person experiencing over consumption and long term negative effects of alcohol.

B) No longer a positive effect: Where alcohol once used to serve as a giver of happy moments, it ceases to do so once you become a chronic drinker. This happens due to developing tolerance for alcohol. Over time, the heavy drinker would no longer feel happy after drinking it. However, it would just serve as avoiding the bad feelings he would get once he tries to give up on alcohol. This extreme dependence is life-threatening and more difficult to cure even in the rehabilitation centers.

D) Blackouts: Consuming alcohol especially on an empty stomach in large quantities resulting in a blackout and passing out. 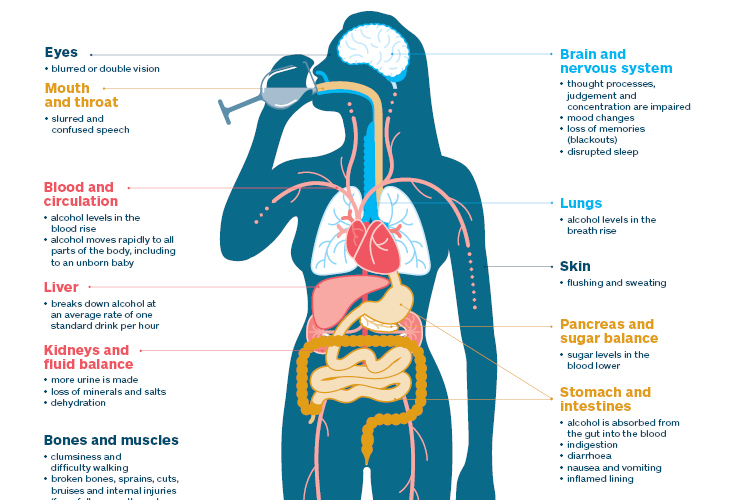 How long does it take for alcohol to affect the brain? 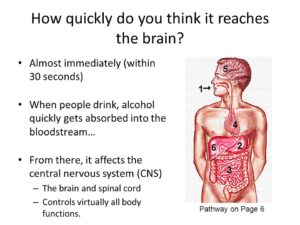 Factors affecting how does alcohol affect the brain

a) the volume and amount of the drinking

How does alcohol affect the teenage brain?

Is there a difference in how does alcohol affect the teenage brain and the brain of a mature adult? The answer is Yes.Surely, alcohol comes with a greater negative effect on the brains of teen since they are still developing. A young teen can not cope up the same way as an adult when it comes to alcohol intake.

According to research, young people who begin drinking before age 15 are four times more likely to develop alcohol dependence than those who begin drinking at age 21.As already mentioned, alcohol affects almost every part of the brain and the nervous system. As several parts of the brain slow down working due to alcohol intake, teens are prone to indulge in wrong behaviors. While they are under the influence of alcohol, drinking may do the following to them:

Lack of critical judgment: Alcohol can affect the ability of a teen to rationalize and take serious decisions. This impedes and clouds the judgment resulting in unprotected sex. reckless driving or other embarrassing situations. A teen would of course also act poorly in academics in such a situation.

Interactions with other medications: Teenage minds are more prone to anxiety and depression and they take medications for that. Alcohol intake when mixed Ritalin, for example, can impact a teen’s ability to perform tasks that require total concentration. 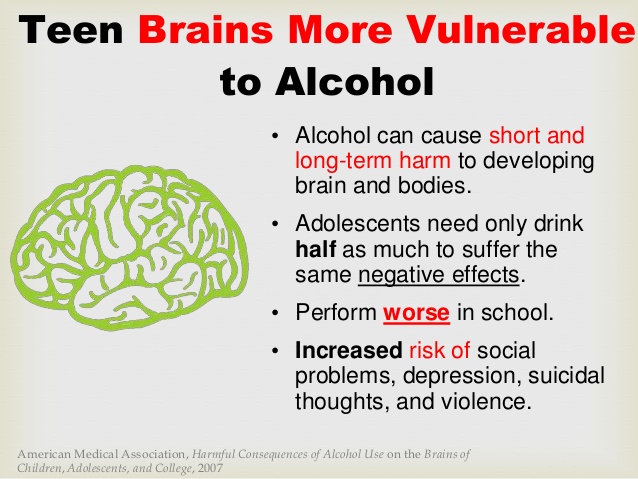 Your life is precious and a source of joy and dependence for many people around you. We have given you a glimpse of how alcohol affects our brain and the body negatively. It is now your job to think about giving up this addiction which may cause you to lose your life.Now is the time to leave this overly dangerous thing behind and vow to lead a better and healthier living. So do not shy away to contact us . You will find our counselling team always on the line, ready to guide you! Lets take the first step together.