Marijuana, also known as cannabis or weed, is a psychoactive drug from the cannabis plant. It is used for medical and more noticeably for recreational use. Many people who support marijuana use, state that it does not have any negative effects.

Marijuana, also known as cannabis or weed, is a psychoactive drug from the cannabis plant. It is used for medical and more noticeably for recreational use. Many people who support marijuana use, state that it does not have any negative effects. However, medical science has not only found it be negatively affecting human health but also negatively affecting when a person tries to quit its use. Therefore people who stop consuming marijuana, experience physical and psychological marijuana withdrawal symptoms.

It is known as the most commonly abused illicit substance in the world due to its intoxicating effects and health concerns. According to the University of Southern California, smoking a single joint can cause as much exposure to cancer-producing substances as smoking of four to five cigarettes. Marijuana use also can cause severe impacts on the lungs. The mental consequences of consuming marijuana have been documented to be quite severe as marijuana inhalers have poorer memories and mental ability than the non-users (National Cannabis Prevention and Information Center, 2011). Read more on the classification of drugs.

THC is the chemical that classifies marijuana as a drug due to its psychoactive, mind-changing intoxication effects. Marijuana also contains CBD, a non-psychoactive chemical that is associated with medical benefits. It does not create the ‘High’ effect but its medical benefits are still under study. Many states in the USA, have legalized it for both medical and recreational purposes. It gives away the idea of marijuana not being addictive but as soon as a regular marijuana consumer stops using it, he starts showing marijuana withdrawal symptoms.

Marijuana withdrawal symptoms range from mild to moderate to severe, varying from person to person. These symptoms can be quite unpleasant, if not dangerous or severe. The longer a persona had used marijuana, the more likely he is to experience withdrawal symptoms and more severe. The symptoms can be severe enough to cause serious effects in functioning. The symptoms of marijuana withdrawal typically start to show within one to three days after the consumption has stopped and can last one to more weeks.

A) The person feels diminished levels of appetite and in severe cases, weight loss

C) During Marijuana withdrawal period, irritability is a common symptom.

D) Increased level of anger has been witnessed in the majority of marijuana withdrawal patients.

F) Difficulties in sleep is a common symptom of marijuana withdrawal which, in extreme cases, includes insomnia.

G) Many individuals experience loss of focus, nervousness, and disorientation.

H) Cravings for marijuana is probably the most common marijuana withdrawal symptom as cannabis is an addictive drug.

L) Increased feeling of depression is one of the most common symptoms of marijuana withdrawal.

M) People have been seen battling with different stomach issues including stomach pains and cramps, during the marijuana withdrawal period.

There are several reasons that cause marijuana withdrawal symptoms. These symptoms may not be as severe or as dangerous as withdrawal symptoms from other abusive substances. Substances like cocaine, heroin, and alcohol are capable of producing severe and deadly withdrawal symptoms. However, Marijuana is a drug that includes delta-9 tetrahydrocannabinol (THC). THC is the principal psychoactive ingredient in marijuana which creates the ‘High’ effect. When a person starts to consume marijuana on a regular basis, his brain and body develop a tolerance for it and the person becomes addictive. When a person stops the use of marijuana, his body and mind have to adjust to not having the regular dose of THC.

Other reasons include the period and amount of marijuana, a person has been consuming. The more marijuana you consume or for a longer period, the more marijuana withdrawal symptoms you will experience and severe. Sometimes, upon leaving the drug, the mind goes into the state of shock as though it is not being supplied with the essential chemical. It is all due to the addictive nature of marijuana as the more you consume, the more your brain depends on this regular supply of THC. AS the mind and body start to adjust to the new ‘Normal’, the person experiences uncomfortable indications which are the symptoms of marijuana withdrawal. However, if a person combines marijuana with other substances such as illicit drugs, withdrawal symptoms may be severe and more heightened.

Usually, it can take a month or more for the brain to return to function normally after leaving marijuana and the withdrawal symptoms diminish with time. For some people, it can be weeks while for some, it can span over a few months to overcome marijuana withdrawal symptoms. Symptoms of mood swings, craving, irritation and physical anxieties of marijuana withdrawal are high during the first week of leaving marijuana and may last up to two weeks. In the second phase, sweating and stomach issues, restlessness, irritability are common symptoms of marijuana withdrawal and may persist for days or weeks. Research has found that cannabinoid 1 receptors start to function normally within 4 weeks of stopping the substance. 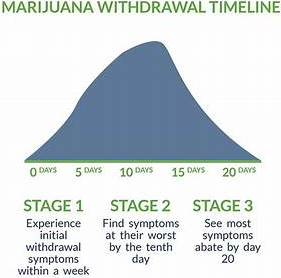 As the substance leaves a person’s system, after the initial phase, many physical symptoms subside in the majority of patients. However, issues cravings and psychological effects usually take quite a long time to diminish. Therefore, treatment under trained professional is necessary to effectively let go of the substance and cop with the symptoms under the care of medical professionals.

Like other substance withdrawals, marijuana withdrawal symptoms also cause some uncomfortable side effects. Typical marijuana withdrawal effects include vomiting, stomach cramps, bodily aches, headaches, muscle cramps, sweating, and anxiety. Diarrhea, shivers and watery eyes are also some common effects as the body tries to free its system of THC. Sleep disturbance usually lasts for a month or more. These effects are normal in most cases and subside or minimize within a few days. However, if these effects persist over weeks or with the same intensity, then the body is likely to dehydrate.

In many cases, severe dehydration causes fatal seizures as it depletes nutrients which the body requires to maintain optimum health. In many cases, these symptoms have been witnessed to be so difficult for people to handle, especially uncontrollable cravings that individuals choose to begin consuming marijuana again to get comfort. You can read here for more on marijuana effects on a person’s mind and body.

Ways to Manage and Prevent

Marijuana is an addictive substance and its withdrawal requires proper care. If someone wants to quit marijuana use, he must consult either a clinician or a substance abuse specialist. He may not need any special instructions if he was not a regular consumer. However, guidance is necessary to leave any abusive drug in a proper way. These are some steps anyone can take to self-help in order to manage marijuana withdrawal symptoms.

a) Try to drink a lot of water and stay hydrated and refrain from sugary, caffeinated drinks like soda.

b) Consume healthy food. Provide your body with a plentiful supply of fresh fruit, vegetables, and lean protein. Stay away from junk food as it can make you feel lethargic and irritable.

d) Find support and do not stay alone. Be with your friends, family members, and others who can help you through the withdrawal symptoms you are experiencing.

a) Different kinds of psychotherapy have shown to effectively treat addiction to marijuana with the support of other measures.

b) Social support develops an encouraging environment that endorses abstinence, including a network of family and friends and other individuals like you. It increases positivity in your life and recaps how far you have come.

c) Motivational enhancement therapy is useful for patients who want to leave the drug but lack motivation either to start or continue the track and go back to use as they cannot manage the effects. The therapy develops confidence in the person to commit.

e) Contingency management uses rewards as an incentive to withdraw from marijuana use.

g) Outpatient therapy or rehabilitation programs are for individuals with moderate symptoms. It involves working with a psychotherapist or other mental health provider by taking sessions on a steady basis.

Take Control of Your Life Now

Addiction is damaging the lives of thousands. Do not be silent and one of them. Call now and get professional and confidential consultancy regarding addiction issues you or your loved one is are experiencing. Take the first step and let us guide you to the positive and addiction free life that awaits you.