How Long Does Meth Stay in Your System?


Home / Faq / How Long Does Meth Stay in Your System?

How Long Does Meth Stay in Your System?

Methamphetamine, popularly known as Meth.Which acts as a stimulant drug to the central nervous system.It is widely popular for easy availability & addictive potential.Generally it is used as a recreational drug.

Detection window of how long does meth stay in your system

Urine test: This test is most commonly used by drug treatment centers, employers and sports administrators. The consumer of meth provides the urine sample by urinating in a cup. The laboratory then tests the levels of substances present in the urine.Once meth leaves the body, the drug is cleared by the kidneys and liver. However, a large number of metabolites are still present in the urine. Hence, the presence can be detected in the urine for up to 72 hours or three days. Chronic use may extend it further for about a week.

Blood test:Police, drug treatment centers etc use this method too frequently. They collect the blood sample by pricking the finger or from a needle. Meth can be detected through blood test until about one to three days after consumption.

Saliva:Meth can easily show up in saliva and sweat, the fluids of our body. Saliva testing involves a swab of the mouth or tongue with an absorbent. This swab test can detect the drug for about four days. This is because saliva has more of the drug than the metabolite.

Hair:Usually, the justice system and sports administrators perform the hair follicle test. Since meth is present all over our system, hair also surprisingly contain its traces.Meth can be detected for up to 90 days, by using about 50 strands of hair. This is why hair tests are a big nightmare for someone who does not want to be caught. 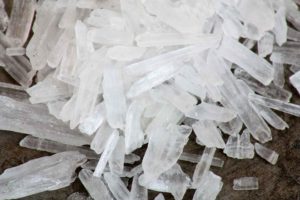 The half-life of Meth:

A substance’s half-life is the amount of time required for the body to reduce the amount of that substance in the system by half. The half-life of meth is about 10-12 hours. It is surprisingly longer than other drugs. This is why meth can be detected by a urine test for up to 72 hours after the last consumption.The half-life of meth also depends on the methods of ingesting. Its half-life is more than 11 hours if it is injected, whereas it has a shorter life if it is smoked or snorted.

Factors affecting how long does meth stay in your system:

The amount of drug consumed: Chronic use increases the likelihood of meth’s presence for long. The more drug an individual uses, the longer it takes the system to metabolize it and eliminate it from the body.

The intensity of usage/the concentrations used: Repetitive consumption of meth while the already consumed meth is still present in the body contributes to higher concentration. The liver thus takes a long time to detoxify it from the body.

Interaction with other drugs: People who use other drugs with meth usually end up with a slower expel of meth from their bodies. Many people take meth with alcohol. This further slows down metabolizing. This is because the liver would first metabolize alcohol than any other drug.

The type of test used: The testing methodology may also affect how long can the drug be found in the body. For example, blood and hair samples provide more time for detection than a urine test. Natural differences in individuals also affect how long does meth stay in your system.

Age: Young bodies have faster metabolism rate. Thus meth would be excreted out in a teenage quicker than a middle-aged or old aged person.

Current medical condition or health status: The better your health is, the more efficiently your organs work to expel meth out of your system. With already present diseases, a new set of symptoms may emerge.

Weight: Obese people have a slower metabolism rate. Hence meth can hang in there longer.

Methamphetamine, popularly known as Meth.Which acts as a stimulant drug to the central nervous system.It is widely popular for easy availability & addictive potential.Generally it is used as a recreational drug.

In the past stimulant drugs helped in reducing inattentiveness, more focus and also treating obesity.Disorders and illnesses with symptoms of lethargy, hyperactivity were treated with the help of stimulant drugs.It was observed that energy levels were increased by using it.No doubt meth has some good quality but overdose or abuse has created a problem.

Physically, Methamphetamine hydrochloride comes in a powder form. You can see ranges in color from light brown to white to a chunky crystal that looks like ice. Meth is famous by street name too, crank, crystal, glass, ice, meth, rock candy or speed.

How does it work?

Meth’s nature of working is such that it increases the amount of neurotransmitter dopamine in the brain. Dopamine is related to feelings of pleasure in the brain’s reward system.

Thus, meth basically hijacks that system of dopamine’s functioning and continues with the overproduction of that hormone. This results in the feelings of euphoria and pleasure.Meth also works by producing increased energy, elevates libido and reduces appetite.

However, it comes with its drawbacks of course. By sending the body into overdrive, it taxes the system’s resources. The continuous consumption of meth equates with the alteration in the normal functioning of dopamine.

Therefore. it makes a person completely dependent on meth. This, in turn, results in severe withdrawal symptoms which is why it is very hard to give up on it.

When a person consumes methamphetamine, the liver metabolizes it. The liver then converts it into amphetamine, pOH-amphetamine, and norephedrine.A couple of hours later, the system begins to process both meth and amphetamine. After processing it into the bloodstream, it removes the excess through excretion by urine. Some of the parts can be excreted out by perspiration too.

If taken by mouth, the amount of meth may peak in the bloodstream between 2.5-3.5 hours. The metabolite amphetamine peaks further at 12 hours.Thus, it is clear that the metabolite may stay for more than 12 hours. Upon the consumption of meth intravenously, the half-life gets longer for about 12.2 hours.If you are concerned about how long does meth stay in your system, you should know that only 50 percent of a dose of meth can exit the body as it entered.

This means that it is not completely metabolized or processed at all.Globally abuse of drugs has been going on for a long time. But, during the last decades, it has increased rapidly.Each day drug addiction has put millions of lives in danger. So to make people aware about the meth and its consequences, This article on How long does meth stay in your system will make them understand about the dangers associated with meth.

Facts On How long does Meth stay in your system?

Do you know? One can see that meth may stay in the body for approx.three days. However, It may stay for approx a week or more in the body of Individuals consuming meth regularly or from a long time. It may even extend for weeks or months if any Psychological conditions are associated with it.Individuals consuming meth should understand that it is very important to know how long does meth stay in your system and what are the serious side effects. So to make you aware you should understand the how meth works in your body when you consume it.

The National Highway Traffic Safety Administration recently reported that the body excretes up to 54 percent of the methamphetamine unchanged.Moreover, the National Forensic Laboratory Information System reported a drastic 53 percent increase in crystal meth. An increase in seizures attacks caused by meth by 20 percent was also noted within a year.These summarized stats are enough to stun us about the negative impacts meth is producing rapidly.

Like any other drug, meth is potentially harmful to our bodies. As clear from the above findings, it actually stays longer than cocaine and other drugs.

Extreme set of symptoms are produced by meth including a failure in all crucial organs of the body. This is why it is important that you give up on this addictive drug right away.

Do not shy away to take the first step which is to ask your loved ones for support. The next step would then include going to rehabilitation centers and support groups.

Feel free to call us. We will be right there for the support you will be needing. Whether it is by detoxification or individual counseling, in the end, it is all worth it to save your precious life.